I found a book in the local library which taught me the following method of producing a paperback from separate sheets of A4 or A5. I reckon it is suitable for volumes up to up to 2cm thick

Materials needed : Vice or Workmate to grip the book tightly. Glue or paste; I use PVA medium, available from hardware shops. Paintbrush for glue, 1cm wide approx. Large holed needle or bodkin and strong thread; I use carpet thread. Hole driller; I use an electric drill. 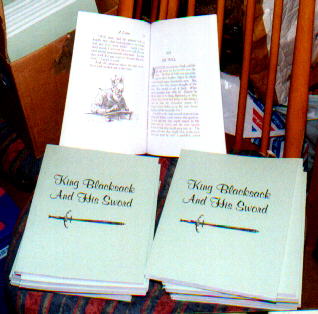 1. Knock the pages up so that they form a tidy block, grip them securely, and glue the spine. Allow two hours minimum to dry.

2. With either a drill, or a hammer and nail, or a bradawl, pierce seven holes 6 mm in from the spine, spaced along ready for the sewing. If the gluing tends to come undone in the process, never mind; after sewing, reinsert the block in the workmate for twenty seconds to make sure the pages are tight together again before sewing. 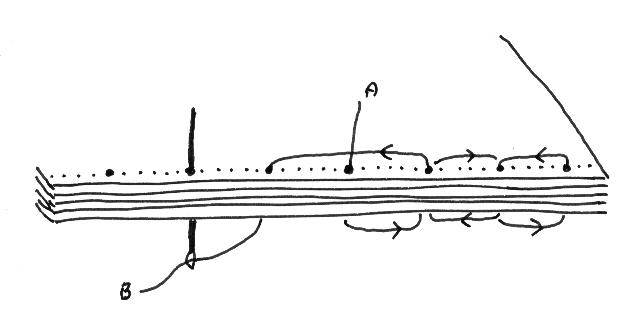 3. Sew figure of eight style as shown in the diagram. Set off downwards from the top of the volume through the middle hole. Note that when you return to the middle hole on the way back, you bypass it, leaving a longer section. Then at the the end of the run, bring the thread up on the other side of this longer section, which allows you to knot the two ends A and B as shown in the second diagram. Make the sewing as tight as you can before knotting. I use three overhand knots. Cut off the ends to 1cm. The sewing acts as the hinge of the book.

4. Bend the cover into shape, scoring the card if necessary, and place in position round the book to check it. The cover should overlap a little; this will be guillotined off later. Now lay the cover to one side. Glue the spine of the book, and the area you have sewn, front and back, for about a centimetre in from the spine. Place the book in the cover, and grip securely as before for two hours minimum, preferably overnight. When the book is finished, guillotine the three edges to make a neat finish, removing two millimetres of the margins of the book in the process.

The key part of the process is keeping the paper flat during gluing, as it will crinkle and warp if you give it a chance. I use my Workmate, and made an arrangement from two short planks of wood which supports the pages from underneath. The next three pictures show the support in the vertical and horizontal planes, and how it fits in the workmate (viewed from above). In the vertical view, I am gluing two books at once, held in place by extra pieces of wood. I have found that simply using weights when gluing is insufficient - there needs to be as much pressure as you can manage.

Cottage Industrialists of the World Unite! 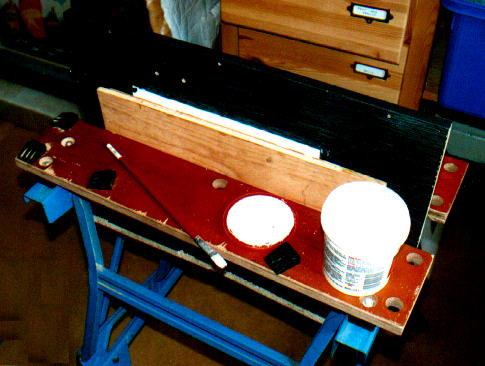